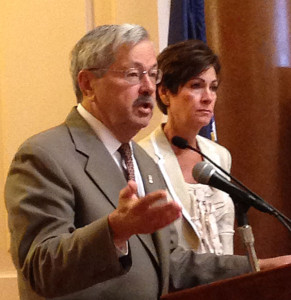 Governor Terry Branstad says school administrators who’re complaining about the level of state support for schools should not resort to raising local property taxes, but should make the kind of budget choices he’s made.

“We in state government have cut the number of state employeed by 1500 and are using our resources in a more efficient manner,” Branstad said this morning during his weekly news conference.

Branstad told reporters he’s not calling for teachers to be laid off, however.

(AUDIO of the governor’s weekly news conference may be found here.)

Branstad took final action on the state budget plan earlier this month, approving a roughly four percent increase in state spending overall. Iowa’s K-12 public schools are getting a one-and-a-quarter percent increase in general state aid. Branstad said schools are also getting 100-million dollars for a teacher leadership plan that will pay some teachers more to be mentors and give schools money to hire more teachers in targeted areas.

“It’s not like the old days, you just throw money at it and that didn’t get us the results we wanted,” Branstad said. “Now we’re trying to specifically target our resources.”

The state’s education community has been complaining about Branstad’s early July veto of nearly $56 million in additional state support that legislators had approved for schools. Lawmakers specified the extra money was to be used for one-time expenses and many school administrators say they had planned to buy next textbooks, but Branstad says that would have been a misuse of any bonus money.

“Textbooks and materials have to be used every year, so they’re an ongoing expense,” Branstad said this morning. “And what I don’t want schools to do it to make committments based on a false promise that’s not going to be sustained.”

Branstad warns the state may be heading into a recession due to “substantial losses” in farm income and state tax revenues may fall. Branstad says that “economic reality” is the main reason he vetoed the extra $56 million for schools. Republican and Democratic lawmakers say the budget plan they sent Branstad was already pared down below the spending level Branstad had recommended.