You are here: Home / News / Hot Buttered Rum uses biofuel while traveling to Iowa and beyond 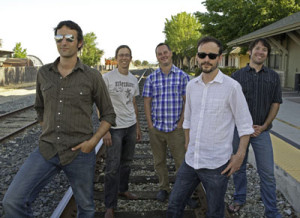 Thousands of music fans from around the state traveled to Des Moines this weekend for the annual 80/35 Music Festival. One of the nearly 50 bands to play the two-day event flew to Iowa from California for their set on Friday.

Bluegrass act Hot Buttered Rum typically tours the country in a van and band member Nat Keefe says they’ve always tried to do so in an environmentally friendly manner.

Their previous tour vehicle, an old school bus dubbed “Buster,” was converted to run on vegetable oil. “For years, with our first two tour buses, we would go around to the back of restaurants and we had this amazing suction machine that would suck up used vegetable oil,” Keefe said.

But, in recent years, used vegetable oil has been harder to come by as it’s now being recycled for more purposes. So, the band ditched the bus for a Dodge Sprinter run on Biofuel. “We used to have a 40 foot coach bus, which is glamorous and wonderful, but it’s also a pain in the (expletive) to take care of,” Keefe said. Hot Buttered Rum has named their new tour vehicle “Van Morrison.”

The band will be travelling through Iowa again in the fall, this time in their van, for shows in Des Moines (Wooly’s) on September 25 and Davenport (Redstone Room) on September 27.