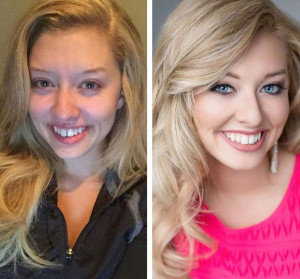 Miss Iowa Taylor Wiebers with and without makeup.

Miss Iowa Taylor Wiebers of Clinton is joining other Miss America contestants in an anti-cyber-bullying campaign called “No Makeup Selfie.”

It started after after a contestant in a North Carolina pageant was harassed online after posting a picture of herself without makeup. Wiebers says she and many other contestants posted their own pictures without makeup under the hashtag – No Makeup Selfie.

“There are so many girls,” Wiebers says. “I know a lot of the Miss Iowa contestants have done it, past Miss Iowas, and that’s just on my newsfeed alone. The whole hashtag has gone viral all over the country.” Wiebers says those posting negative comments underestimated the “sisterhood” of those competing in the Miss America Pageant.

“We all have a platform we work so hard for and we all have community service things we’re out doing,” Wiebers says. “The last thing on my mind is my makeup and how I’m looking physically when I’m with the people that I’m passionate about and when I’m with the organizations that are doing so many things for our community.”

The 21-year-old former Miss Clinton County says it was sad that so many people were surprised that she and other “pageant girls” would post such pictures of themselves. “The support that I was shown after I posted my picture really amazed me,” she says. “So many people from my community and people that I had never met commented or liked my picture and said to me they were proud and they were happy to have representation from Iowa that showed we are so much more than physical beauty.”

Wiebers says the anti-cyber-bullying campaign should continue as it can show the Miss America contestants have more to offer. Plus, she says the Miss America system can be shown as a scholarship and community service campaign, not just a beauty pageant. You can find out more about Wiebers’  on her Miss Iowa Facebook page.:

Wiebers will represent Iowa at the Miss America Pageant in Atlantic City, New Jersey, in September.