You are here: Home / News / Perry hoping for ‘no deal’ with Iran 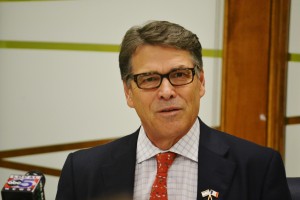 Republican presidential candidate Rick Perry says he fears President Obama is too anxious to secure an agreement with Iran over its nuclear ambitions.

“My hope is that they will get down to the last moment at midnight in Vienna and say, ‘No deal,'” Perry says. “I’m prepared for this Administration to sign a deal – even a bad deal – just so they can say that they got a deal.” Perry spoke early this morning to a group of 30 people who are part of the “Iowans for Israel” group. Perry promises that, as president, he would maintain the “long and unshakeable” ties the U.S. has had with the Jewish State of Israel.

“People are going to see a very unwavering commitment to Israel from me, as they have for decades,” Perry says. Perry warns there’s been a rise of anti-Semitism and intolerance across the globe, along with the growing threat of Islamic terrorists. If U.S. negotiators reach an agreement with Iran later today, Perry is urging Republicans in congress “to tear up” the accord.

“It’s not good for us, it’s not good for Israel, it’s not good for the Middle East,” Perry said. “I mean, all they’re doing is guaranteeing a Sunni bomb.” Perry is arguing that if Iran, which is dominated Shia Muslims, obtains a nuclear weapon, then a nuclear arms race will start in the Middle East — because countries dominated by Sunni Muslims will seek the bomb, too. Perry, the former governor of Texas, is in Fort Dodge over the noon-hour today and will continue campaigning in Iowa tomorrow. Perry, along with nine other GOP candidates, will be attending The Family Leadership Summit in Ames this Saturday, July 18th.