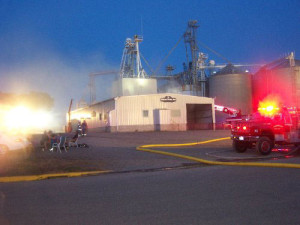 Firefighters were called to the Deluxe Feed Incorporated elevator.

Firefighters from six northwest Iowa communities were called to Ireton about 9 last night to fight a fire in a feed mill and grain elevator. Ireton Fire Chief Rich Steckelberg says he believes the fire at the Deluxe Feed Incorporated may have started in the electrical room.

Smoke could be seen billowing from the structure. An aerial truck provided by the Sioux Center Fire Department, was used to spray water on the four-story high feed mill, and firefighters were seen dismantling the metal walls to have better access to the fire. 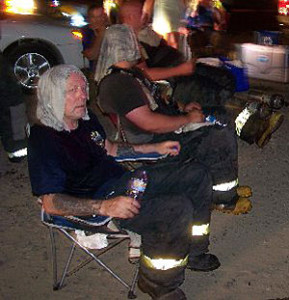 Firefighters had to deal with extreme heat while fighting the fire in Ireton.

Several Ireton townspeople not only were watching the fire, but assisted the firefighters by providing bottled water to drink and wet towels which was placed on the firefighters’ heads.

Steckelberg said the state fire marshal will arrive on Monday to help with the investigation. Firefighters were at the scene the entire night. There were no injuries reported. Damage estimates due to the fire may run into the tens of thousands of dollars.