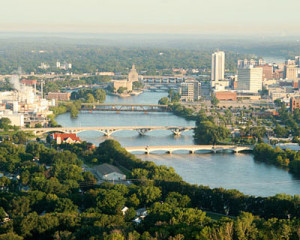 Cedar Rapids Police responded to 56 shots fired incidents in 2013. That rose to 96 last year. This year, between January and May, officers responded to 30 reports of shot fired.

Daniel Baldwin, with First Lutheran Church in Cedar Rapids, organized the vigil. He told KCRG-TV he asked groups to gather in two different locations, with the participants taking symbolic steps of coming together to meet at Riverside Park.

“I realized, well, this needs to be bigger than just the Christian thing or a Jewish thing or a Muslim thing. This needs to be everybody in the Cedar Rapids community,” Baldwin said. People from a variety of religious and neighborhood organizations lit candles and stood together against violence. Cedar Rapids Police Chief Wayne Jerman (like “German”) told vigil participants that people don’t deserve to live in fear.

“I plead with all of the citizens of Cedar Rapids to come together like everyone here tonight and make a statement that they are not going to tolerate these acts,” Jerman said. People also left with a pamphlet that included a challenge. Organizers are asking people to get to know five of their neighbors that they don’t already know. Vigil leaders said it’s a way to build trust in the community.