You are here: Home / Crime / Courts / ‘Kerrie On’ t-shirt sales raise thousands of dollars for family of slain police officer 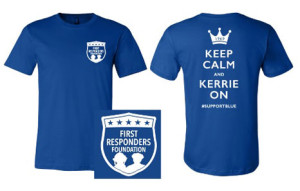 The family of fallen Omaha police officer and Iowa native Kerrie Orozco will get a check for $215,000 from the sale of “Kerrie On” t-shirts. The 14,000-plus t-shirts were printed by Ideal Images of Omaha where president Peter McCann says he’s amazed at how quickly they sold.

McCann says, “In all honesty, my goal was 10,000 so to hit 14,000, we’re still selling t-shirts, so who knows?” The company teamed up with the Iowa-based Hy-Vee grocery store chain to sell the shirts and they also have been popular online and are continuing to sell nationwide. McCann says he wanted to do his part.

Officer Kerrie Orozco was shot to death while on duty Wednesday.

“Being able to do these things is, to me, why I really like being in business,” McCann says. “This is rewarding to be a part of this. Our staff worked so hard, ‘What time do you need me?’ and also, the off-duty police officers were coming in the Saturday afterwards and they were wanting to make deliveries.”

The 29-year-old Orozco was shot to death while serving an arrest warrant in May. The suspect was also killed.

Orozco was a Walnut, Iowa, native and a resident of Council Bluffs. She left behind a husband, two stepchildren and a newborn baby girl. That new daughter, Olivia, was born several months premature in February and was due to come home from the hospital the day after Orozco was killed.