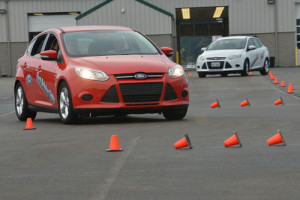 Teen drivers will get a chance to polish their skills and learn from professionals the next couple of days.

Ford’s “Skills For Life” driving program is making its only Iowa stop in Grimes Wednesday and Thursday.

Jim Graham oversees the program. “We teach advanced driving skills to teens with permits or full licenses and we take them with professional driving instructors and put them in cars and take them through skills that have been identified as lacking with newly licensed drivers,” Graham says. “So for example, we look at skills in the area of vehicle handling, recognizing hazards, speeding and spacing, and of course distracted and impaired driving too.”

Graham says this gives the young drivers more time behind the wheel in specially equipped vehicles. “We have probably 15 instructors, 15 cars. Every teen gets to go through exercises with professional driving instructors, and then they get to drive also and the instructor helps them and identifies the issue they have and helps them get through those — so, it’s all hands on,” Graham says. He says it’s important to give the young drivers the extra instruction now.

“The research shows most of the crashes tend to happen shortly after they get their driver’s license,” Graham says. “They go through driver’s education — which is rules of the road and some driving — there’s nothing wrong with that, they need that, but the advanced driving skills they tend to lack. So this is really a step in the process and they will learn things they didn’t learn in driver’s education. And we also strongly urge parents to come out.” He says parents can learn from the instructors some of the things they should be doing with new drivers and some things they shouldn’t.