You are here: Home / News / Blum ‘has concerns on multiple levels’ about Iran deal 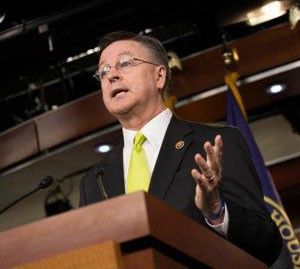 “I thought the purpose of the agreement was to dismantle their nuclear program entirely,” Blum says. “And that’s obviously not the case.”

Congress now has 60 days to review the agreement. Blum, who is in his first term as a member of the U.S. House, plans to read the final document before announcing how he’ll vote on it, but Blum already “has concerns on multiple levels.” For one, Blum says international inspectors may not be able to get into suspected nuclear facilities.

“Anytime/anywhere inspections — that is not the case. There’s a 14-day advance notice required on suspected enrichment sites,” Blum says. “And I remember going through this with Saddam Hussein and Iraq, how he would move things because we had to give advance notice.”

Blum says while Iran is the world’s largest state-sponsor of terrorism, the country seems to be getting a “signing bonus” in this deal.

“Being a businessman, that’s a term I use. I believe the number’s $50 billion — that’s with a ‘B’ — of frozen assets of Iran would be returned to them after the agreement is signed,” Blum says. “To put that in perspective I believe the president said amonth ago that Iran’s annual military expenditures are around $30 billion, so we would free up nearly twice as much as they’re spending today on their military.”

Blum says he’s also “very disappointed” three Americans who’re being held prisoner in Iran are not being released as part of the deal. Find out what the rest of Iowa’s congressional delegation has been saying about the deal by going here and here.