You are here: Home / News / Carson appears at foreign policy forum in Dubuque 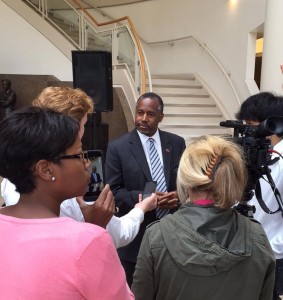 Ben Carson answers questions from the press after his talk in Dubuque.

Republican presidential candidate Ben Carson says “with so much evil” in the world, the U.S. cannot engage in appeasement.

“We have to sort of reject this ideal of ‘soft power’ which the adinistration has put forth: ‘If we give them jobs and if we’re nice to them, you know, they’ll be nice to us and we can all sit around the fire and sing Kum Bah Yah,'” Carson says. “But, you know, it doesn’t actually work that way.”

Carson says the deal with Iran that President Obama’s touting is “a recipe for disaster” and Carson warns it could be “the first fateful step toward a frenzied nuclear arms race in the Middle East.” Israel has been harshly critical of the deal and Carson says the U.S. needs to stand firm with allies like Israel.

“Other countries are looking at how we treat our allies. They say: ‘Well, if they treat them that way, how will they treat us?’ And at the same time our enemies are looking at us and they’re saying: ‘Those guys are paper tigers. You know, they don’t mean what they say. They don’t say what they mean. You can push them around,'” Carson says. Carson made his comments today at a forum in Dubuque sponsored by a group called APPS — Americans for Peace, Prosperity and Security. The group has hosted GOP presidential candidates Bobby Jindal and Rick Perry at similar forums in Waterloo and Des Moines. On Friday, the same group will host a foreign policy discussion in Cedar Rapids with Republican presidential candidate Lindsey Graham.