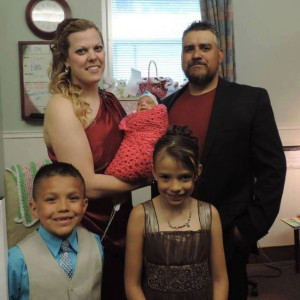 Hector Orozco with his wife Kerrie and their children.

A southwest Iowa man whose police officer wife was shot and killed this spring may find himself on the fast-track to getting U.S. citizenship.

Hector Orozco, of Council Bluffs, is an immigrant from Mexico and has legal status. His wife, Kerrie Orozco was a Walnut, Iowa, native and an Omaha police officer who was fatally shot in May while serving an arrest warrant.

A bill being introduced in Congress would allow the surviving spouses of first-responders killed in the line of duty to more easily gain citizenship. Nebraska Congressman Brad Ashford, of Omaha, is sponsoring the measure and says it’s getting a good response. “We just have to reach out and do our work. That’s what legislating is all about,” Ashford says. “We’ll take what time it takes to get a good number, hopefully, of members to sign on to the bill and then move forward.”

The legislation is based on current American policy for the surviving spouses of military personnel killed in combat. It allows those spouses to apply for expedited citizenship. Congressman Ashford says he’s hoping to offer the bill in the U.S. House within a week or two.

“The next step is to get signatories on the bill and introduce it before the recess on August 1st,” Ashford says. “Then, it would go to a committee, probably the Judiciary Committee. I think the more signatories we get on the bill, the better chance we have of getting it out this year and that would be the goal.” Hector left Mexico in 1999, at the age of 17, and now works as a supervisor for a lawn care company in Omaha. He married Kerrie in 2011. He has applied for citizenship, but the wait could stretch to six years. Hector has two children from a previous marriage, while he and Kerrie also had a child, Olivia, born in February three months premature.

Kerrie was to begin maternity leave the day after she was fatally shot. The suspect in the shooting was also killed.