You are here: Home / Fires/Accidents/Disasters / DOT signs remind motorists to not leave kids in hot cars 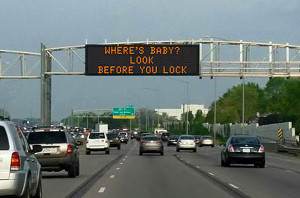 The electronic billboard signs on Iowa interstates are including the message “Where’s Baby? Look Before you Lock” this week to remind people to not leave kids in hot cars.

“This week’s message is an important one, especially given the high heat this week. We want to make sure that people are paying attention when they leave their vehicles,” Henry says. She says children die of heatstroke across the country every year after being left in locked vehicles.

“Any time one child dies in a situation like this it’s tragic so if we can prevent even one death or one child getting sick because they left their child for a small amount of time I think it’s worth it,” according to Henry. Henry says the billboard message was planned even before this week’s high temperatures.

The federal government reports that on average nearly 40 children die of heatstroke each year, and more than half were left in vehicles unintentionally.

Photo courtesy of the DOT.