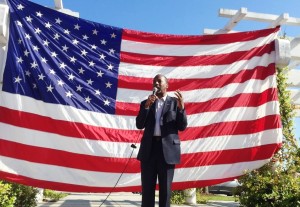 Dr. Ben Carson speaking to a crowd of supporters.

“This is just barbarism. I mean, what else can you call it? You know, selling body parts of babies? It’s just unimaginable that this could be going on in America, but what’s even more unimaginable is that people are numb to this kind of stuff,” Carson says. “They say: ‘Well, so what. Who’s on Dancing with the Stars tonight?'”

Planned Parenthood says it’s following the law, gets permission from patients and gets paid fees for storing and transporting fetal tissue to research institutions. Carson made his comments early this morning during a campaign stop in Mason City where about 100 people packed into a local restaurant to see the candidate. Carson says these kind of events in Iowa are an “incredibly important” part of his campaign strategy.

“There are lots of small towns and venues and people get a chance to be up close and personal and actually see who the candidates are to a much larger extent than in most of the other places and people here tend to be more tuned in to what’s going on,” Carson says, “so I think it’s part of the vetting process that is very important to our national elections.”  Carson says Iowa audiences are concerned with the nation’s financial health and he says they “hate” President Obama’s “failure to lead on the world stage.”

“And they recognize that the longer we absent ourself from a leadership position, the more powerful other people become,” Carson says. “And in the long run, the more difficult it becomes for us to have the kind of beneficial influence in the world that we want to have.”

Carson also made an appearance this morning at the Franklin County Fair in Hampton. He’s among the 10 Republican presidential candidates who will appear Saturday at the day-long summit in Ames hosted by The Family Leader, a Christian conservative group.