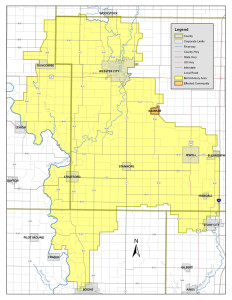 Hundreds of customers of Xenia Rural Water in at least ten communities in four central Iowa counties are under a boil advisory due to a water main break. Corey Iben, administration manager for Xenia in Bouton, says roughly 850 customers are impacted by the boil order.

“Last night, around 8 o’clock, we noticed the levels in our water tower north of Stratford were dropping,” Iben says, “and we started getting calls from customers with lower pressure, which indicated to us we had a water main break somewhere out there in our system.”

The break was found in a 16-inch main not far from the water tower near Stratford. Xenia customers in parts of Boone, Hamilton, Story and Webster counties now need to take precautions.

Iben says, “Until further notice, they will need to boil their water in case there are any contaminants that were introduced into the system in the water main break.”

The entire system needs to be flushed and samples need to be taken. It will be at least 48 hours before the boil order is lifted. Customers are impacted in the following towns: Boone, Duncombe, Ellsworth, Jewell, Kamrar, Randall, Stratford, Stanhope, Story City and Webster City.

Learn more at the website:www.xeniawater.org