You are here: Home / News / Bikers prepare to start RAGBRAI in Sioux City 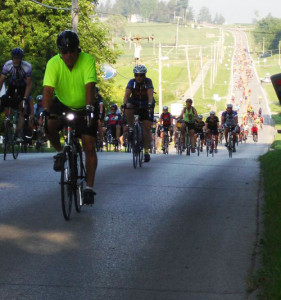 Thousands of bike riders will descend on Sioux City this weekend as the city is the starting point for RAGBRAI. The 43rd annual event will challenge bikers to one week of riding that averages 65 to 75 miles each day.

Veteran rider Dick Billings says the hardest day is the first leg from Sioux City to Storm Lake. “It’ll be a lot of fun and certainly I hope that those maybe who are going to go the whole route will take a ride — it’s a public street as long as they ride carefully — come out and join us for a few miles,” Billings says.

Billings says people from around the globe are blown away by Iowa’s beauty when they take the ride. He says in one of his first years he met a man in his 40’s who had never been east of Denver, Colorado in his entire life. “And so, here he is taking pictures of bean fields and cornfields, which you and I would say: ‘you are taking pictures of what’,” Billings says.

Al Joens rides a tandem bike with his wife and says this will be his 32nd time on the ride. He has done the entire ride — roughly 500 miles — 17 times. “It’s the people that make it so fun, it’s just 20,000 different interesting characters,” he says. “RAGBRAI is an equalizer. It doesn’t matter if you are millionaire or have no money at all. It doesn’t matter if you are a doctor or a laborer. When you are out on a bike climbing a hill, none of that means anything, you’ve all got to get from point A to point B.”

Cyclists will follow the tradition of dipping their back tires in the Missouri River on Sunday in Sioux City before starting the ride. The ones who finish will dip their front tires in the Mississippi next Saturday at the conclusion in Davenport.