Five competitors for the Democratic Party’s next presidential nomination spoke to more than 1,300 Iowa Democrats gathered in Cedar Rapids tonight for the state party’s “Hall of Fame” fundraiser. 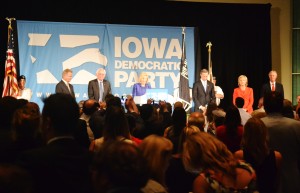 All five of the Democratic presidential candidates take the stage for the first time in Cedar Rapids.

The evening began with all five candidates coming on stage and people in the audience got out their smart phones to snap a group photo. Iowa Democratic Party chair Andy McGuire quickly urged Democrats to focus on 2016.

“There is too much at stake folks,” McGuire said. “We need to put people in office who will put Iowa families first.”

The candidates did not sling rhetorical arrows at one another, but did take aim at Republicans. Hillary Clinton blasted GOP front-runner Donald Trump for “spewing…hate” about undocumented immigrants and she said Americans don’t need “a lecture” from Jeb Bush about working longer hours, they need a raise.

“Democrats are united. We’re energized and we are ready to win this election…I’m never going to let the Republicans rip away the progress we have made,” Clinton said, to cheers.

Bernie Sanders called for raising the minimum wage and he railed about the influence of the Koch Brothers.

“When one family spends more money than either of the two major political parties, that is not democracy, that is the path to oligarchy. That is why Citizens United must be overturned,” Sanders said, to cheers.

Martin O’Malley called for raising the minimum wage to $15 an hour “whenever and however we can.”

“Main Street struggles while Wall Street soars,” O’Malley said. “…This is not how our country is supposed to work and we can do better.”

Former Rhode Island Governor Lincoln Chafee was the first candidate to speak and he used about half of his alloted time. The final speaker of the evening, former Virginia Governor Jim Webb, spoke right after Sanders — as a flood of Sanders supporters were exiting the room.

“Bernie, you always fire me up,” Webb quipped. “I’m here to turn the lights out folks.”

Webb drew a smattering of applause for expressing concern about the Iran deal, but a wider, more positive reaction from the crowd when he mentioned his long-ago warnings about starting a war in Iraq.

On Saturday, 10 Republican candidates will appear at a forum in Ames sponsored by The Family Leader, a Christian conservative group. During the invocation for Democrats in Cedar Rapids earlier tonight, State Representative Ako Abdul-Samad of Des Moines seemed to offer a counter message: “There are many religious groups and many political parties that think you belong to them only. Dear God, we ask you to show in 2016 that they don’t know what they’re talking about, that Dear God we are going to move forward.”

Some in the crowd cheered during that and other portions of the prayer.