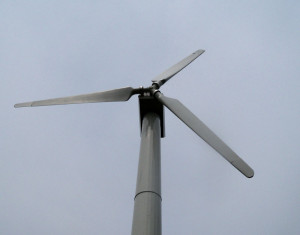 Wind turbine on the DMACC campus in Ankeny.

A report released Thursday by the American Wind Energy Association predicts Iowa could produce 40-percent of its energy needs from wind power within five years.

Mike Prior, with the Iowa Wind Energy Association, says the projection is based on the current rate of development.

“If development continued at the pace that is was, uninhibited, we would be able to meet those percentages by that time. Certainly there are challenges, PTC being one of them.

There may be some transmission challenges,” Prior said. PTC refers to production tax credits. The federal incentive program for wind farms expired at the end of last year. Industry analysts have also suggested Iowa could eventually sell its wind-generated electricity to other states.

Beth Conley with Houston-based Clean Line Energy Partners, is working to make that concept a reality. “Right now, we are engaged in the regulatory process in Iowa, so working through our siting and working through our engineering,” Conley said. “We are in conversations with both customers in the east that would be interested in purchasing the power and customers in the west that are interested in developing this wind power to move east.”

The report issued Thursday is based on data from the U.S. Department of Energy. Iowa was the top state in country in 2014, generating 28 percent of its electricity by wind. Nationally, that figure is just 4.5 percent.