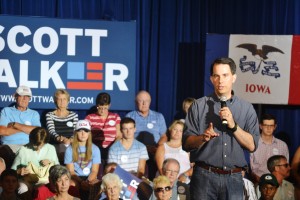 Scott Walker talking to a crowd of supporters in Cedar Rapids.

Republican presidential candidate Scott Walker spoke to a crowd of more than 300 this afternoon in Cedar Rapids, his first “town-hall” style event in the state this year. This is Walker’s first trip to Iowa since he formally launched his campaign on Monday — and he’s promising to do a “full Grassley.”

“We’re going to make all 99 counties just like Chuck Grassley, Joni Ernst, Terry Branstad and Kim Reynolds,” Walker said at the beginning of his appearance.

Walker says he “will not speak ill” of his competitors for the GOP’s presidential nomination, but Walker said there are “two kinds” of candidates: fighters and winners.

“There are fighters, people who’ve been in Washington fighting. They’re fighters who’ve fought but have yet to win those battles and there are winners, people who have won elections and reelected and things of that nature, but largely have not taken on the big fights over the last couple of years,” Walker said. “What I believe makes us unique is we’ve done both. We have fought the good fight and we have won those fights.”

Walker began the event in Cedar Rapids by asking the crowd to join him in prayer for the four Marines who were killed in Tennessee yesterday — one of whom is a Wisconsin native. Later, when a member of the crowd asked Walker about gun rights, he returned to the event.

“I think the federal law that prohibits our heroes, our men and women in uniform, from being armed at places like this recruiting center needs to be changed, so that they can protect themselves,” Walker said, to cheers, whistles and applause.

Walker said he understands why the law “may have seemed appropriate” two decades ago.

“Back in the ’90s remember we’d just come off end of the Cold War. Containment had been our focus. Our enemy…at that point had been beaten,” Walker said. “Today’s it’s a whole different world. I’m mean ISIS is like a virus. Radical Islamic terrorism is like a virus, not only over there, but sadly, increasingly, we’re seeing it here.”

Walker spoke briefly, but spent most of his time answering questions from the crowd that ranged from education standards called “Common Core” to tax policy.

Republican candidate Lindsey Graham spoke earlier today in Cedar Rapids, at a foreign policy forum. Tonight, five competitors for the Democratic Party’s presidential nomination will gather in Cedar Rapids to speak at a fundraiser for the state party. Hillary Clinton, Bernie Sanders and Martin O’Malley are holding events around the city this afternoon.