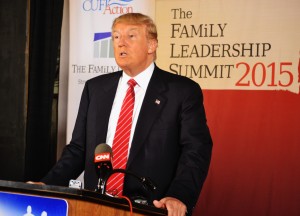 Donald Trump answers questions from the media at The Family Leadership Summit in Ames.

Republican presidential candidate Donald Trump, the new front-runner in national polls, doubled-down on his criticism of the country’s immigration situation during an appearance in Ames today.

“He’s a war hero ’cause he was captured. I like people that weren’t captured, O.K. I hate to tell you,” Trump said of McCain, to laughter and some groans from the audience.

Trump was quizzed about the comment repeatedly during a question-and-answer session with reporters half an hour later.

“John McCain talks a lot, but he doesn’t do anything,” Trump said. “…I don’t like the job that John McCain is doing in the Senate because he’s not taking care of the veterans.”

Trump is among the 10 Republican presidential candidates set to speak today at The Family Leadership Summit. The event is hosted by The Family Leader, a Christian conservative organization, and the crowd applauded Trump throughout his 25 minute appearance, even when he cursed.

“We’re so politically correct that we can’t move anymore,” Trump said, winning cheers, applause and some hoots from the crowd.

The format for today gives members of the audience a chance to ask questions of the candidates and a man asked Trump to commit not to run as a third party candidate if he doesn’t win the GOP presidential nomination.

“No, no,” Trump said and someone in the audience yelled: “Good for you!”

Trump continued: “This country has great potential, but soon it’s not going to have that potential because we’re being drained by incompetent leaders, by horrible people.”

Trump was quizzed about his faith — he’s a Presbyterian and he told the crowd he prays, goes to church and feels “cleansed” when he takes communion, but when pressed by host Frank Luntz Trump during his appearance at the summit, Trump could not cite an instance when he’s sought God’s forgiveness.

“I get a standing ovation,” Trump said to Luntz as they left the stage. “Other people don’t.”

Republican rival Marco Rubio spoke before Trump this morning and Rubio got a standing ovations as he left the stage, too.