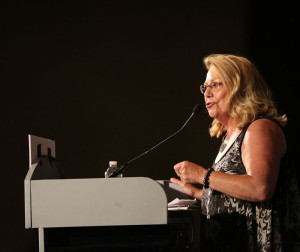 Democratic leaders say they’re “tired of the excuses” from Republican Governor Terry Branstad and his fellow Republicans in the legislature and they are calling for a special legislative session to “support local schools.”

Senate President Pam Jochum, a Democrat from Dubuque, blasted the Republican governor during a speech this weekend at an Iowa Democratic Party fundraiser.

“We worked overtime this session to make sure Iowa’s children have a quality education,” Jochum said. “…That, my friends, was vetoed by Governor Branstad, the man who claims to be the education governor. The emperor has no clothes.”

Given the partisan make-up of the Iowa legislature, however, convening the House and Senate this summer is impossible without the support of Republicans — and Governor Branstad and the top Republican in the Iowa House both say Republicans don’t want one. Jochum, the second-ranking Democrat in the Iowa Senate, was inducted into the Iowa Democratic Party’s “Hall of Fame” at its annual banquet Friday night in Cedar Rapids.

“You know, Democrats, it’s time to take the gloves off,” Jochum said. “You know elections matter and you know every vote counts. One vote in the Democratic-controlled Senate stopped the House Republicans and Terry Branstad from abolishing early childhood education.”

Democrats hold a 26-to-24 majority in the Iowa Senate. Jochum, Senate Democratic Leader Mike Gronstal and House Democratic Leader Mark Smith published an opinion piece in The Des Moines Register this weekend, urging Iowans to ask their local senators and representatives “to support their local schools by joining the call for a special session to restore critical funding for Iowa schools.”