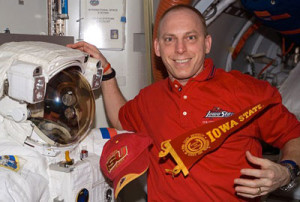 Clayton Anderson during his space mission in 2007.

The only Iowa State University graduate to walk in space is coming back to the Midwest this weekend on his first book tour. Retired astronaut Clayton Anderson flew two missions aboard the International Space Station, spending a total of 167 days in orbit.

The 56-year-old Anderson attributes his small town upbringing to giving him the tools he needed to succeed in the challenges of a weightless environment and in his colorful career.

“Midwesterners have a great work ethic,” Anderson says. “They don’t rely on others to get things done. They do it themselves. They roll up their sleeves, put on their work boots and their gloves and they get after it. Those are some of the characteristics that have helped me through my years in trying to become an astronaut and then, finally, being one.”

Anderson is from Ashland, Nebraska, just southwest of Omaha, and he’s returning there to be the grand marshal in the town’s annual Stir-Up Days Parade on Saturday. The parade holds a special place in his heart, dating all the way back to 1965. “I was in the kiddie parade dressed as a Mercury-Gemini astronaut wearing all aluminum foil that my mom pulled out of the pantry and her hat box closet,” Anderson says. “To have walked in that parade back when I was six years old and now to be returning there as a flown astronaut is kinda’ cool.”

Following the parade, Anderson will be signing copies of his new book, “The Ordinary Spaceman,” at the Ashland Chamber of Commerce and later, at the Strategic Air Command & Aerospace Museum, also in Ashland. No Iowa dates are scheduled, as yet.