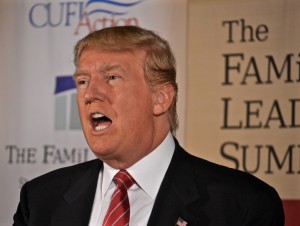 Donald Trump at The Family Leadership Summit in Ames.

This weekend’s political reality in Iowa showed how a bombastic Donald Trump can capture the headlines.

Democratic presidential candidate Hillary Clinton started things off Friday night during an appearance in Cedar Rapids. “Finally, a candidate whose hair gets more attention than mine,” Clinton said, to laughter and applause from the crowd of more than 1,300 Democrats. “But there’s nothing funny about the hate he is spewing.”

That was criticism of Trump’s recent comments about Mexican immigrants. John McCain, a prisoner of war in Vietnam who was the Republican Party’s 2008 presidential nominee, has suggested Trump is appealing to “the crazies.” On Saturday morning in Ames, Trump shot back.

“He hit me,” Trump said of McCain.

Frank Luntz, an author and pollster sitting beside Trump on stage, interjected: “He’s a war hero.”

Trump responded: “He’s not a war hero. He’s a war hero ’cause he was captured. I like people that weren’t captured, I hate to tell you.”

Some in the crowd applauded. Some groaned. Moments later, Trump stood by his comments as he was surrounded by reporters.

“Go back to being a pundit,” Trump said as reporters peppered him with questions.

Then Trump’s Republican competitors started firing. Nine other Republican presidential candidates spoke at The Family Leadership Summit in Ames on Saturday, too, and all but Ben Carson and Ted Cruz called Trump’s comments out of line. Rick Perry, an Air Force veteran, said Trump is unfit to be commander in chief.

“Donald Trump owes every American veteran and, in particular, John McCain, an apology,” Perry said forcefully, moments after sitting down on stage to chat with Luntz.

Organizers had hoped Saturday’s event would draw attention to issues that are important to conservative Christian voters, but Trump’s rant overshadowed significant moments. For instance Bobby Jindal got a roaring standing ovation when he criticized the “mainstream media.”

“They don’t apply the same standards to this president that they apply to the rest of us,” Jindal said and the event’s host asked the crowd to “stop” after nearly a minute of cheering.

The crowd and the candidates also highlighted their opposition to Planned Parenthood and to the recent Supreme Court ruling legalizing same-sex marriage in all 50 states.

“We will take this country back for our values,” Cruz declared during his appearance on stage, earning an immediate standing ovation from the crowd — and then Cruz got out of his chair on stage and stood to applaud, too.