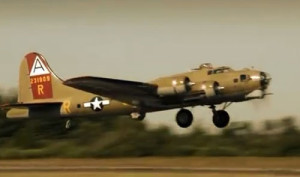 Three historic aircraft from World War Two are flying into Iowa for two stops this week. The Collings Foundation’s “Wings of Freedom Tour” features a P-51 Mustang, a B-17 Flying Fortress and a B-24 Liberator.

Tour coordinator Michael Dober says the public will have the opportunity to see the very rare warbirds up close, in particular, the B-24, which he calls the Rodney Dangerfield of bombers.

“There were over 18,500 of them made and this is the last fully-restored B-24,” Dober says. “They flew farther, faster and carried a bigger bomb load than the B-17. This B-24, you could basically put live ammo and bombs on it and it’s mission ready.” The planes are flying into Mason City today and will be there through Wednesday, when they’ll fly to Waterloo and be there through Friday. They were the most technologically advanced aircraft in the world at the time they were built in the 1940s, but modern pilots would have a hard time getting one off the runway.

“I’ve had Air Force gentlemen that have came and — they fly the new jet planes — and they went on a ride and I asked, ‘Did you get any stick time?’ and they looked at me in horror and said, ‘No, that’s all stick and rudder. We wouldn’t have any idea how to fly these things,'” Dober says.

Aside the two larger bombers, the P-51 fighter is by far the smallest of the three historic planes on display, but the Mustang is special as it’s a two-seat trainer. “There’s only the pilot and one person behind him,” Dober says. “It’s a dual-control so you actually get to fly the Mustang. It was the premiere fighter of World War Two. It’s a very unique aircraft. If you hear it, you’ll remember the sound it makes for of your life.”