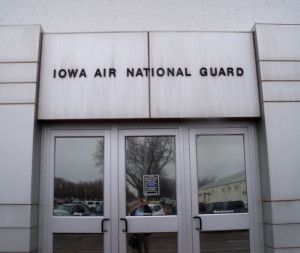 The adjutant general of the Iowa National Guard, Timothy Orr, will review security at all guard facilities in Iowa after last week’s shooting rampage in Chattanooga Tennessee that left four marines and one sailor dead.

In some states governors have ordered that guard members should be armed at recruiting stations and other facilities.

Governor Terry Branstad’s spokesman Jimmy Centers says Branstad asked the top leader in the guard to conduct the review of Iowa’s military facilities. “That of course includes recruiting stations as well. It’s important to note the guard has an active security plan in place that does include armed personnel at certain facilities,” Centers says.

Centers won’t predict whether the review will lead to more armed personnel at recruiting stations. “It’s too early to speculate what possible recommendations may come from Major General Orr,” Centers says. Centers says the soldiers deserve to have a work environment that is safe and secure.

Governor Branstad will meet Thursday in Washington with the Council of Governors, which advises federal officials on military matters. Centers says the governor will urge a review of security at military installations nationwide.