You are here: Home / Education / First new dorm in decades dedicated at University of Iowa 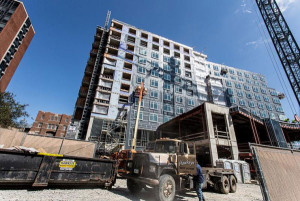 The retiring Sally Mason performed what’s expected to be her last public act as the president of the University of Iowa on Tuesday. Mason presided over the dedication of a residence hall, the first new dorm on the Iowa City campus in almost 50 years.

The ten-story Peterson Hall cost $53 million to build and it’ll be home to more than 500 students when classes start this fall.

It’s named after former Iowa Board of Regents president Mary Louise Peterson, who was at the ceremony. The last new dorm to open at Iowa was Slater Hall in 1968.