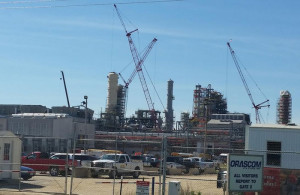 The Iowa Fertilizer Plant near Wever.

Workers returned to the Iowa Fertilizer Plant construction site today in Wever after it was evacuated Tuesday following a bomb threat. Iowa Fertilizer Company Officials issued an order to evacuate the facility around 11:30 a.m.

The bomb threat was discovered scrawled on the wall of a Port-A-Potty on Monday, saying that a “bomb will go off at noon tomorrow”.

Fertilizer Company Officials told Lee County Sheriff Jim Sholl that no threat was discovered, and that the evacuation was precautionary as bomb sniffing dogs made their way through the massive plant site. No combustible fertilizer materials were present in the plant facility, which is not yet in operation.