You are here: Home / News / Lost Grove Lake finds a following as it hits full depth 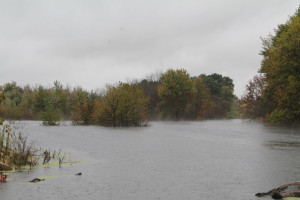 A new state recreation area, 30 years in the making, has reached a milestone. Lost Grove Lake, located in eastern Iowa’s Scott County, first opened to the public one year ago.

“There were some folks who really didn’t believe they would ever see Lost Grove Lake built and full of water,” Dolan said. “So, when we actually hit full pool…I mean, it’s just a huge milestone and a real relief to a lot of folks who have been waiting a real long time for this to happen.”

Planning for the project started in 1985, a site was chosen in 1987, and the DNR finally acquired the last piece of land in 2003. Heavy rains this summer completed the fill of the lake.

The DNR began stocking the lake in 2012 and it’s already become a popular fishing spot. “I got a letter from a gentleman the other day…he actually wrote me a 4-page hand-written letter sent in overnight mail to tell me about the wonderful fishing experiences he’s had at Lost Grove Lake already,” Dolan said.

The lake covers 400 acres between Eldridge and Princeton. A study by Iowa State University estimates Lost Grove Lake will attract 350,000 visitors a year, boost the area economy by $20 million and eventually support 175 jobs.