You are here: Home / News / Bike riders to roll into Coralville 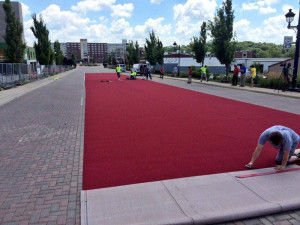 Coralville rolls out the red carpet for bicyclists.

Day six of an annual bicycle ride across Iowa is underway and it’s a challenging 65-mile-long route for the thousands of participants. Today’s trip from Hiawatha to Coralville is called the “hilliest” day of this year’s RAGBRAI.

The route has cyclists entering Coralville by passing over Interstate 80 at the busy 1st Avenue intersection. Josh Schamberger, president of the Iowa City-Coralville Convention and Visitors Bureau, told KCRG-TV he’s encouraging motorists to be patient. “There will be plenty of police and law enforcement directing traffic, just slow down for a little bit,” Schamberger said.

Drivers could also avoid the area altogether. Schamberger said drivers should be willing to put up with the extra traffic. “Twenty or 18-hours worth of headache as far as traffic is worth it when your town is going to get $1 million or $2 million dumped into local businesses,” Schamberger said.

The $2 million figure is based on a recent RAGBRAI study at the University of Northern Iowa. As bicyclists peddle into Coralville today, they’ll ride across a giant red carpet that’s rolled out on the Iowa River Landing near I-80. Tonight’s entertainment in Coralville includes the band Cheap Trick. RAGBRAI ends tomorrow in Davenport.