You are here: Home / News / Fiorina: it’d be ‘selfish gesture’ for Trump to run as third-party candidate 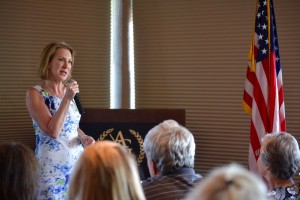 Republican presidential candidate Carly Fiorina last night told reporters the GOP would “clearly” have a problem in November of 2016 if Donald Trump were running as a third-party candidate.

“I think it would be a rather selfish gesture on his part,” Fiorina said.

Trump told “The Hill” newspaper yesterday that if he is not treated fairly by the Republican Party, he would seriously consider running as a third-party candidate. Fiorina, who is in the midst of a four-day campaign swing through Iowa, will not qualify for the first televised debate among the Republican presidential candidate. FOX News rules will allow only the 10 candidates who are doing best in national polls on stage. In response to a reporter’s question about the debate, Fiorina said FOX News made the rules and Trump has met them.

“My own view is I think it would be helpful if all the candidates, including Donald Trump, would talk about solutions sometimes and, maybe, would keep their eyes on who it is we really have to beat,” Fiorina said. “So, the boys are going to fight and I’m going to keep doing what I’m doing, which is talking to people about who we’re really have to beat in 2016 what the solutions to our problems are.”

Fiorina made her comments after her appearance in Ames last night at a fundraiser for State Auditor Mary Mosiman.