You are here: Home / Agriculture / Lieutenant Governor Reynolds rallies for the RFS in Nebraska 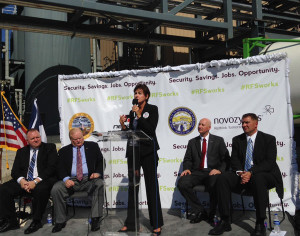 Iowa’s Lieutenant Governor traveled to Blair, Nebraska today for a rally with Nebraska Governor Pete Ricketts in an effort to get the EPA to change its mind about slashing billions of gallons from the amount of renewable fuels required to be used in the U.S.

Lieutenant Governor Kim Reynolds made the trip as the deadline for ending comment on the proposed Renewable Fuels Standard (RFS) approaches on Monday.

“I’m am proud to say, that in Iowa, our entire congressional delegation, as well our general assembly, joined Governor Branstad and I in calling on the EPA to really reverse course in what was see as a flawed proposal to really gut the RFS,”Reynolds says.

Reynolds says the move would cost Iowa 19.3 billion dollars and 73,000 jobs. Reynolds and Governor Ricketts encourage residents of both states to speak out on the issue. “Now it’s time to share your comments in support of a strong RFS before Monday’s deadline,” Reynolds says.

She says federal officials need to hear from as many people as possible about the importance of ethanol and other renewables. “Together, we believe we will be heard, and the EPA will wake up and realize the many benefits of a robust RFS,” Reynolds says. They encourage you to go on-line and make your comments know on the RFS.

Brent Martin of the Nebraska Radio Network contributed to this story.