You are here: Home / News / Sanders says lack of pre-K in U.S. is ‘disgraceful’ 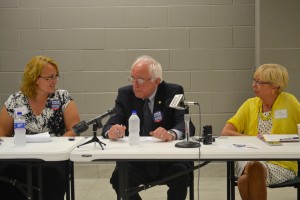 Bernie Sanders at the roundtable discussion.

Independent Bernie Sanders, a candidate for the Democratic Party’s presidential nomination, said the country needs to invest in universal pre-school for America’s toddlers.

“The truth of the matter is  taking care of kids and providing the quality care that they need, the quality education they need, is an expensive proposition,” Sanders said.
“So I believe in universal pre-K as a radical idea, it is an expensive idea.” Sanders spoke to a group of 25 people Friday at a roundtable discussion hosted by “Every Child Matters” – an organization  calling on presidential candidates to talk about policies that impact children and working families.
“Everybody in this room understands that the most formative years of a human being’s life is from zero to four years of age. And, to turn our back on children at that period is disgraceful,” Sanders said. Sanders has also called for “free” college tuition, financed by higher tax rates and Sanders acknowledged that universal pre-K education is expensive, too.
“Any serious person who tells you they’re concerned about kids has got to tell you that they’re prepared to ask the wealthiest people, the largest corporations in America to start paying their fair share of taxes,” he said. Sanders said “the wealthiest country in the history of the world” should not have the current level of childhood poverty universal pre-K would be one solution to that problem.
Later that night, Bernie Sanders held a town hall event at Valley High School in West Des Moines with around 1,100 people in attendance. Democratic candidates Hillary Clinton and Martin O’Malley will also hold campaign events in Iowa over the weekend.
(Photo by Asya Akca)