You are here: Home / News / ‘The gloves are off,’ Trump says as he goes after Iowa front-runner Walker (AUDIO) 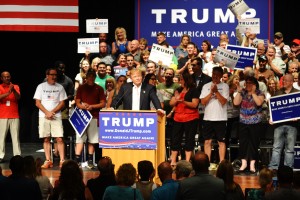 Republican presidential candidate Donald Trump spoke to more than 1,400 in Oskaloosa this afternoon.

Trump greeted a crowd inside the 700-seat high school auditorium and his speech was broadcast into a building next door for the overflow crowd, with still more standing outside unable to get in to either venue.

“Beautiful, beautiful,” Trump said, when he arrived on stage. “What a welcome.”

Trump spoke for nearly an hour, touching on many of the topics he’s discussed in previous solo stops in Winterset and Des Moines in June. Trump did take on Republican rival Scott Walker, the current front-runner in Iowa polls.

“He’s the only guy that’s ahead of me. I can’t believe I’m in second place…Folks, would you please put me in first place so I feel better?” Trump asked and the crowd cheered.

Trump told the audience he had appreciated and contributed to Walker’s fight to survive a recall election in Wisconsin, but Trump said a “stupid person” who works for Walker made a “horrible statement” about him and Trump blasted Walker’s management of Wisconsin.

“They projected a $1 billion surplus and it turns out to be a deficit of $2.2 billion. The schools are a disaster and they’re fighting like crazy because there’s no money for the school…and he was totally in favor of Common Core,” Trump said. “Did you know that?”

The crowd cheered Trump’s negative critique of Walker. Later, Trump told reporters Walker hadn’t been that nice to him anyway.

“One of his people hit me…and I said: ‘Hey, now the gloves are off,” Trump said. “…The real truth is that Wisconsin’s it’s a mess right now. It’s a mess, from an economic standpoint.”

Trump told reporters there is “no cap” on the amount of his personal fortune that he will spend running for president. The Trump campaign handed out “Veterans for Trump” signs to the crowd and Brad Nagle, a native of Cherokee, Iowa, who is a former Navy Seal, spoke to the crowd before Trump arrived on stage.

“Donald Trump loves veterans unlike some others who think . crazies,” Nagle said, to applause. “Donald Trump is someone who talks the talk, but walks the walk. I like that.” A man in the crowd gave a Marine “oorah” yell in response.

Trump later told reporters his well-publicized dust-up with Arizona Senator John McCain was “over with.”

Susan Leonard of Oskaloosa lives just a few blocks from the school where the event was held and she was among the crowd who arrived to see Trump today.

“He’s out there being our voice,” Leonard said. “He’s out there saying what we can’t say for anybody to hear, but he’s got the platform to say it and get it out there. Some things I wish he’d maybe tone it down a bit, be a little subtle, but that’s the only tip I would tell him.”

“I like his outspokenness. I’m so glad that he has the courage to say what needs to be said and, quite frankly, I really don’t care who is offended,” Binns said.

Both women, who accidentally wore block dresses with white polka dots to the event, say they “probably” will Caucus for Trump, unless someone else in the GOP field “steps up” and makes the case on the issues the way Trump is.  Jill Jepsen and her husband are more than ready for Trump. Jepsen, who is from Oskaloosa, made six signs to wave at the event.

Forty-year-old Dana Jones of Ottumwa wore a Reagan-Bush ’84 t-shirt to the event because he sees a lot of Reagan in Trump.

“He says it the way it is,” Jones said. “He’s not reading off (any) teleprompter or he (doesn’t) have any, like, notes and I believe he’s honest and gets straight to the point and no other politicians out there are like that.”