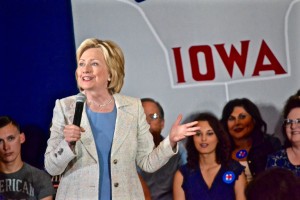 “I know that if we start addressing it, we’re going to actually be creating jobs and new businesses,” Clinton said in Ames this afternoon.

Clinton released a video message early this evening, calling for a dramatic, nationwide shift to power sources like solar panels and wind turbines, so that “every home in America” would get its electricity from “clean renewable energy” within a decade of her taking office. During a speech a few hours earlier in Ames, Clinton gave a sneak peek of some of her prescriptions.

“I want more wind, more solar, more advanced biofuels, more energy efficiency,” Clinton said, to applause and cheers. “And I’ve got to tell you, people who argue against this are just not paying attention.”

Clinton praised the State of Iowa for being “ahead of the curve” in promoting not only wind energy and advanced biofuels, but establishing state tax rebates for installing solar panels in their homes and businesses.

“I think that’s pretty smart and the projections about what that will mean for Iowa are really positive,” Clinton said in Ames. “So other states could follow Iowa’s lead.”

At the federal level, Clinton would support continuing the wind production tax credit along with a recalibration of other tax incentives that are “too heavily weighted…toward fossil fuels.”

“We can do this. We need to set high goals again,” Clinton said. “…I’m setting some really high goals that we’re going to meet when I’m president.”

Clinton denounced the Republican field of presidential candidates for their responses on the issue.

AUDIO of Clinton’s appearance in Ames, 52:00

Carol Williams of Ames said as she was leaving the event that it’s refreshing to have a candidate say climate change is “real” and “let’s do something about it.”

“I’m a park ranger, so I got into being a park ranger because I care about the environment,” Williams said, “so the idea that we’re ignoring it completely is appalling to me. We’re so far behind already. We have to get on the bandwagon.”

Williams went to see Clinton on today, but she also saw Clinton competitor Bernie Sanders when he was in Ames. Williams said Clinton’s appearance, though, went “a long ways” toward convincing her to vote for Clinton in the Caucuses.