You are here: Home / Human Interest / Hundreds shave their heads to raise funds for Monticello boy 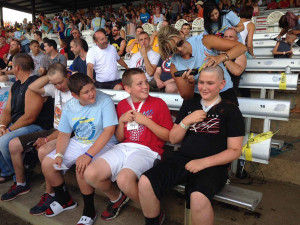 More than 400 people had their heads shaved in a Monticello fundraiser.

Hundreds of people gathered at the Jones County Fairgrounds Sunday to show support for the son of Monticello Police Chief Britt Smith. About six months ago, 5-year-old Austin Smith was diagnosed with a rare form of cancer when doctors discovered a brain tumor.

The rally for Austin involved an attempt to break the Guinness World Record for the most heads shaved in an hour. Kevin Smith, Austin’s grandfather, told KCRG-TV he wanted to make sure he was first in line. “It’s just awesome to see this,” Kevin Smith said. “It’s hard every day to watch him, but this is a really neat day and a lot of friends and a lot of people we know are here.”

Organizers of the event reported 417 people had their heads shaved — well above the goal of 372. Austin’s mother, Mikinzie Smith, told KCRG that means a lot. “(It means) that he’s not alone. You know? Our community has been amazing from day one. We couldn’t be more humbled by it,” Mikinzie Smith said. Organizers documented everything to present to the Guinness Book of World Records with videos and pictures.

Mikinzie Smith said her son finished radiation at the end of March, and they’re now working with their doctor to find alternative treatments.