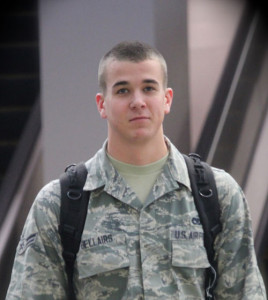 An airman with the Iowa National Guard drowned over the weekend while serving on temporary duty in Guam. Drew Bellairs, of Osage, was just 20-years-old.

“He swam into a series of caves and his friends found him …they tried to resuscitate him, but to no avail,” Hapgood said. “Authorities in Guam are describing this as a tragic accident. Our hearts go out to his family.”

Drew Bellairs is survived by his father and mother, David and Beth Bellairs, sisters Jenny and Natalie, and brother Sam, all of Osage. Bellairs graduated from Osage High School in 2013 and was a student at  Iowa State University. He was a member of the Maintenance Group, with the Iowa National Guard’s 185th Air Refueling Wing based in Sioux City.

“He was on temporary assignment to Guam as a mechanic and crew chief for a KC-135 aircraft,” Hapgood said. “He’d only been there a short time before this accident happened.” Bellairs enlisted in the Iowa National Guard in July 2012.