You are here: Home / News / Project AWARE picks tons of garbage from the Wapsipinicon River 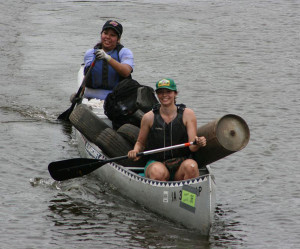 Organizers of an annual river cleanup event have released the results of this year’s effort. Lynette Seigley, with the Iowa Department of Natural Resources, is coordinator of Project AWARE. Volunteers paddled and cleaned 65 miles of the Wapsipinicon River through Buchanan, Linn and Jones Counties in eastern Iowa.

“A total of 30 tons of trash were pulled from the river,” Seigley said. “The bulk of that was tires and scrap metal.” Volunteers removed 677 tires and 14.56 tons of scrap metal. The river cleanup ran July 11th through the 16th and involved a record number of volunteers.

“We had 433 people participate at one point or another,” Seigley said. In addition to Iowans, volunteers came from Arkansas, Colorado, Illinois, Kansas, Minnesota, Missouri, Nebraska, South Dakota, Washington, and Wisconsin. Seigley said there was even one person from Sweden.

The was the 13th year for Project AWARE, which stands for A Watershed Awareness River Expedition. “For the event, we’ve now surpassed 1,000 river miles that have been cleaned up across Iowa,” Seigley said. According to Seigley, 91-percent of the trash pulled from the river this year was recycled.