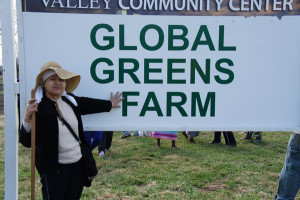 A program in central Iowa links up refugees from around the world with plots of land on which they’re growing food for themselves, for their families and for sale.

Hilary Burbank supervises the Global Greens program for Lutheran Services of Iowa. There are about 150 refugee families tilling the dirt at a dozen community gardens in the Des Moines area, in addition to a larger five-acre farm.

“There are quite a few from countries in Africa, like Burundi, Rwanda, Congo,” Burbank says. “We also have quite a few farmers from Bhutan, which is near Nepal and India, and also from Burma.”

The program coordinates refugees with land, helps to educate them about production and offers business development training. While some of the refugee-farmers are merely trying to help feed their families, others are applying the skills they already have to a larger scale and are selling their produce at farmers’ markets. 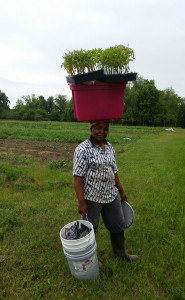 Jacqueline carries plants to the field.

“Most of the refugees that are coming to the United States are from agrarian backgrounds so that’s what they did for their sustenance, it wasn’t even a job, it was just the way of life,” Burbank says. “It’s really, really healing to be connected to the land, especially refugees that have left their country and had their land taken away from them. It’s healing and really good for everybody on a lot of different levels.”

In addition to the emotional healing, the program provides access to healthy produce, lower grocery costs, more income, a social outlet and connections to cultural traditions. Plus, it’s an opportunity to share agricultural traditions with the next generation. Farmers who are marketing their vegetables to native Iowa consumers are growing traditional plants like tomatoes, green beans, onions and potatoes, while others are cultivating a taste of their homeland in the American soil. Some growers had never-before seen things like carrots, while Iowans would be hard-pressed to identify some of their delicacies.

“A lot of folks from Burma are growing things like roselle and other greens that they can mostly just grow in Burma,” Burbank says. “Some of our African farmers are growing what’s called lenga-lenga which is a form of amaranth greens that’s super-popular in those countries.” Most of the plots are being planted, tended and harvested entirely by hand and the rewards are plentiful.

“Our farmers are so passionate and really, really good at what they do,” Burbank says. “We feel like there’s such a community drive for it, we can’t keep up with the demand.”

The Global Greens farmers’ market is held every Saturday at the LSI offices in Des Moines.