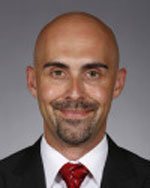 A researcher at Iowa State University finds a link between the insulin that regulates blood sugar in our bodies and Alzheimer’s disease. ISU’s Auriel Willette conducted the study with a researcher from the Wisconsin Alzheimer’s Institute.

“In certain brain regions that are affected by Alzheimer’s disease, they show that these neurons are using less and less blood sugar. And so, these problems with using blood sugar were also selectively related to — in these same people — to having problems with memory,” Willette says. People who are obese tend to become insulin resistant, which could lead to Alzheimer’s disease.

Willette says the link between the insulin resistance and memory issues was apparent. “Immediate memory over the course of a couple of minutes, all the way down to 20 minutes later,” Willette says. He says this study may be enough warning for people to think more about losing weight now, to prevent the possible onset of memory issues later.

Willette wants to do more work on the impact of blood sugar levels on the brain. “Some subsequent work that I want to do is trying to see…if you are overweight or if you are obese, if you do engage in moderate exercise, could that have an affect on the brain where we don’t see the relationship we’re seeing here?,” Willette says.

Willette says having less sugar means the brain has less energy to relay information and function, but there’s a lot that isn’t known. “We as brain scientists know very little about the dynamics of how this works,” according to Willette. “We are just now kind of beginning to understand this as to how we perceive food and things along those lines.” He says this new link involving brain sugar and insulin raises more questions.

“In relation to how insulin might give us that extra jolt of energy to be able to figure something out or to remember something or to make a new memory — things along those lines — we really don’t understand much of how that works at all. It’s just a really, really new field, and so know we are just trying to puzzle out what it all means,” Willette explains.

Willette’s findings were published in the Journal of the American Medical Association Neurology.