You are here: Home / Crime / Courts / UNI campus back open after suspicious package is checked 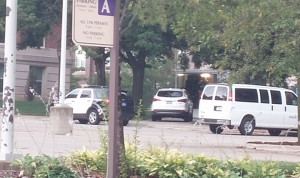 The Waterloo Police bomb squad found a suspicious package at UNI was not dangerous.

The University of Northern Iowa campus was shut down for around two hours this morning after a suspicious package was found.

University officials say the bag in question was found around 7 a.m. on the grounds outside Maucker Student Union by UNI police walking across campus.

Once the discovery was made, UNI officials decided to notify the public of the potential threat. An alert posted on the school’s website just before 7 a.m. said Waterloo police were investigating a suspicious package found on campus and all UNI buildings and grounds would be closed to all personnel until at least 10:30 a.m.

The Waterloo police bomb squad later determined the suspicious bag was filled with audio/visual equipment and posed no threat to the public or campus. Investigators don’t know where the bag came from, but they believe it may have fallen off a cart.

Police began reopening the campus around 9:30 a.m. The university resumed normal operations about an hour later.