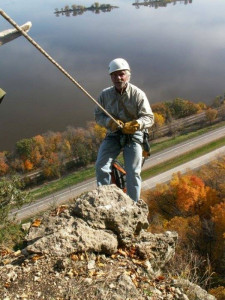 Anderson’s internet bird cam of the Decorah Eagles went live in 2011 and the birds almost immediately became one of the world’s largest wildlife education programs.

The former director of the MacBride Raptor Project in Solon, Jodeane Cancilla, says the eagles’ bird cam was an important resource. “To be able to know that that was being seen throughout the world — wow — I mean, that’s such a wonderful learning opportunity,” Cancilla says.

She says countless school kids and others were able to experience and learn about nature through the eagle cam. “So many schools had it plugged in when they were studying birds and were able to watch those. And, many of the programs I’ve done over the years have all referenced Bob’s work when they come down and see Spirit, the Bald Eagle at the Raptor Center,” according to Cancilla.

Cancilla says Anderson’s death is a tremendous loss for the state of Iowa and the raptor world. He was also very dedicated to many other projects including ospreys and peregrine falcons.