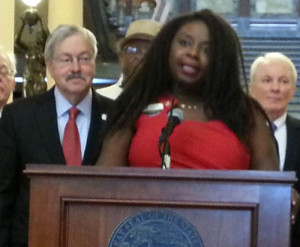 A third annual summit on racial disparities in Iowa’s prisons, to be held next month in Ankeny, is being expanded to two days and moved to a larger facility. Iowa NAACP President Betty Andrews spoke at a statehouse news conference today to promote the summit.

“For every one Caucasian person, there are 13.6 African-Americans in the prison system per capita here in the state of Iowa,” Andrews said. “That is more than double the national average.” African-Americans represent just over 3 percent of Iowa’s population, but they make up 26 percent of the inmates in Iowa’s prisons. 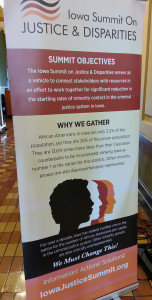 “This is nothing short of a crisis,” Andrews said. “Does that mean that black people in Iowa are worse than (black people) in other states? We think not. The one thing we know is Iowa has to deal with this disparity from within the criminal justice system and from within the community.”

Governor Terry Branstad plans to attend next month’s summit and at today’s news conference, he claimed Iowa has made “some strides” in reducing racial disparities in prisons. “As we’ve reduced the prison population, we’ve also seen the recidivism rate go down,” Branstad said. “You might think, you increase paroles and recidivism would go up, but they’ve done a good job of identifying people who are ‘good risks’ and we’ve actually made progress.”

The Iowa Summit on Justice and Disparities is scheduled for August 28-29 on the DMAAC Campus in Ankeny.