You are here: Home / News / Senator Ernst and others introduce bill to cut Planned Parenthood funding 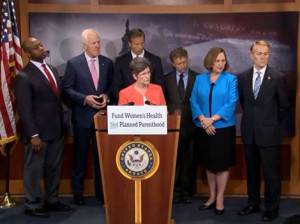 Iowa Senator Joni Ernst took the lead today in introducing a bill that would cut federal funds to Planned Parenthood in the wake of the release of videos showing leaders in the organization talking about harvesting body parts from aborted babies to be sold.

Ernst was joined at a Washington, D.C. news conference by 7 other Republican Senators, including Senate Majority Leader Mitch McConnell of Kentucky.

“The recent footage depicting Planned Parenthood’s role in the harvesting of organs — heart, liver, kidneys — of unborn babies is morally reprehensible and vile,” Ernst says. “The American people, Republicans and Democrats alike, are horrified by the utter lack of compassion shown by Planned Parenthood for these women and their babies.”

Ernst says people in both parties are upset by the videos, including a Democrat candidate for president. “In fact, now Hillary Clinton is calling these Planned Parenthood images ‘disturbing.’ And I agree. These videos are hard for anyone to defend, and hit at the moral fiber of our society,” Ernst says.

She says the bill won’t hurt the availability of health services for women.”I want to make clear that there will be no reduction in overall federal funding to support womens’ health,” according to Ernst. Ernst was asked if the bill would also include state funding.”What we are discussing right now is just that federal legislation, and then how those state dollars, local dollars are handled, is another issue that will have to be addressed later on,” Ernst says.

She was also asked if she is against all research using fetal tissue. “That is a separate issue. What we’re seeing right now is absolutely reprehensible. There are a number of questions that have been raised by these videos,” Ernst says. “I have joined and led 49 other Senators in a letter to Health and Human Services Secretary Sylvia Burwell asking that she take a look at this. We want to make sure that any documents regarding this issue are preserved and that she is doing a thorough investigation. And we will see what the results are after she does that.”

Democrat Hillary Clinton’s campaign released this statement from Jill June, the former president of Planned Parenthood of the Heartland, in response to the Republican Senator’s news conference:

“Republican efforts to defund Planned Parenthood are nothing but a callous and political attempt to put ideology ahead of the health and well-being of Iowa women. We’ve seen this movie before. Senator Ernst and other Republican senators should drop their latest attack on Planned Parenthood that provides health care each year to nearly 60,000 patients in Iowa and surrounding states, including in hard to serve rural areas. Hillary Clinton believes health care should be left between a woman and her doctor – full stop. It’s time politicians stop trying to insert themselves in these personal decisions and instead focus on the issues Iowans elected them to solve.”