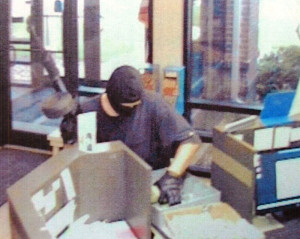 Authorities believe the man who held up a credit union in Mason City this week is the suspect known as the “AK-47 Bandit,” who’s wanted in multiple bank heists in several states.

Mason City Police Lieutenant Rich Jensen says the man walked into the Iowa Heartland Credit Union on Tuesday at 10 a.m., armed with a semiautomatic rifle. He demanded money, forced the bank employees into the vault, then fled in a Toyota Camry.

“In previous robberies, the suspect used a dark-colored Nissan Maxima with chrome door handles,” Jensen says. “The suspect left behind an improvised explosive device that was rendered safe by the FBI and the local fire marshal.” Though he was wearing a ski mask, Jensen says it’s believed he’s the same suspect responsible for robberies in at least four other states.

“This suspect shot and wounded a Chino, California, police officer after robbing a bank in 2012 and has since been linked to four bank robberies and one attempted bank robbery in multiple states, using the same rifle,” Jensen says. Lieutenant Andy Bjelland, with the Chino Police Department, says the Chino robbery happened after the suspect phoned in a bomb threat at another facility as a distraction before robbing the bank.

Upon arrival at the bank, an officer interrupted what appeared to be a carjacking by the suspect. He fired at the officer and left the officer seriously wounded. The officer has had several major surgeries since the incident but is now back on duty. Bjelland says ten days later, the suspect unsuccessfully attempted to rob a bank in Sacramento, California, and then three days later, he robbed a Vacaville, California bank.

Since then, he robbed a North Bend, Washington, bank in July 2012, a Rexburg, Idaho, bank in November 2012 and the First Nebraska Bank branch in Nebraska City, Nebraska, in August of last year. While the suspect fled the Mason City bank in a dark-colored 2007-to-2009 Toyota Camry, he had previously used a chrome-packaged 2009-to-2011 Nissan Maxima. Bjelland calls it “a significant change.”