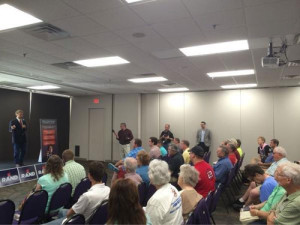 Rand Paul during a campaign stop.

Republican presidential candidate Rand Paul is campaigning in eastern Iowa today, touting his proposal to get rid of the complicated federal income tax code and replace it with a simple “flat” tax.

“You could fill out your tax return on one page,” Paul said. “It would be a big boon to Iowa. It would leave a lot of money — millions and millions of dollars would stay in Iowa and never get to Washington.”

Paul started early this morning by speaking to about 50 voters in Waterloo, where nearly 14 percent of the city’s population is black. Paul has been an advocate of criminal justice reform and he has called for making more non-violent drug crimes misdemeanors rather than felonies.

“I wouldn’t be locking up whole generations of young people,” Paul said. “Our drug war has disproportionately locked up African Americans.”

Paul made a midday stop in Williamsburg and afternoon stops in Washington and Tipton. He’ll take batting practice Saturday morning in Davenport with the Quad City Bandits, a minor league baseball team.