You are here: Home / News / Walker: GOP nominee may be chosen by convention 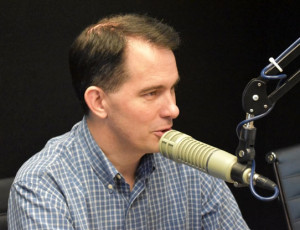 Republican presidential candidate Scott Walker is not ruling out the possibility a clear winner will fail to emerge after next year’s primaries and caucuses around the country and delegates at the GOP’s 2016 national convention will wind up picking the party’s White House nominee.

“It’s possible. I mean, it’s a great field, a lot of great candidates…Sooner or later it will be easier to tell how many are not running in the Republican field than those that are,” Walker joked over the noon-hour during an interview on KMA Radio.

Walker, who is the governor of Wisconsin, said he will not “speak ill” of his Republican competitors, but he’s telling audiences he’s different from his rivals because he’s both a  “doer” and a “fighter.”

“I just didn’t win three elections in four years in a blue state,” Walker said. “I won on the issues that people care about.”

Walker’s most high-profile fight was his successful effort to roll back the collective bargaining rights of unions the represent government employees.

“Unions are just fine. What we did is we took on the big government union bosses and we put the power back firmly into the hands of the hardworking taxpayers,” Walker said today. “That was good for the taxpayers. It was pro-worker.”

Walker signed a “right to work” law in Wisconsin early this year. It forbids organized labor from forcing non-union workers to pay union dues or fees in a workplace where employees have voted to unionize. Walker is on a campaign swing through southwest Iowa today, with stops scheduled in five counties.