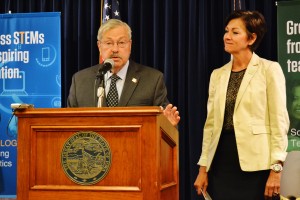 Governor Terry Branstad says he’d like to earmark more state funding for schools rather than give districts a lump sum to spend as local officials see fit.

“Instead of the old way that we used to do things, we gave all this across-the-board money with no accountability and Iowa kind of stagnated while other states put focus on things that increased their standards and improved their student achievement,” Branstad says.

Branstad’s comments run counter to what many Republican presidential candidates are saying about allowing parents and local school boards to make decisions about curriculum.

“We used to buy the idea: ‘We don’t need to have state standards. This can be done at the local level,'” the Republican governor says.

Branstad says that’s why he has earmarked money for a teacher improvement plan and specified that schools are to spend a certain amount of money on reading programs in the early grades and classes for older students that focus on science, technology, engineering and math.

“It’s not just give us the money, no accountability any more,” Branstad says.

Branstad’s been getting criticism from local school administrators for vetoing nearly 56 million dollars that many schools had planned to use to buy new textbooks and computers. Branstad suggests he might have approved that level of one-time spending if it had been targeted.

“We want to become best in America again and I think that’s going to take specific and strategic investments in education that focus on things that really make a difference,” Branstad says.

Branstad cites the $10 million he had suggested for programs to help minority students do better in school. Legislators did not earmark the money for that initiative. Branstad says it’s time for state policymakers “to move forward” and work together on “proven” programs, like the focus on science, technology, engineering and math courses.