You are here: Home / Crime / Courts / The next phase for the old Iowa State Penitentiary in Fort Madison 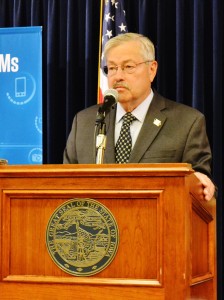 “It’s kind of impressive or imposing,” Branstad says, “depending on how you look at it.”

The prison was established in Fort Madison 176 years ago, before Iowa became a state, and on Saturday more than 500 inmates were moved into the new state prison about two miles away. Branstad says he’s talked with the mayor of Fort Madison about some of the plans being discussed locally for what became known as “The Fort.”

“There are facilities that could be used by the community for recreation and otherwise,” Branstad says, “and we certainly want to work with the community of Fort Madison on it.”

But Branstad says some areas of the facility are just too old and obsolete to be converted for another use. Some closed prisons, like Alcatraz in California where Al Capone was held or Robben Island in South Africa where Nelson Mandela spent 18 years, have become tourism attractions. The Eastern State Penitentiary in Philadelphia — famous for its system of total solitary confinement — was closed in 1970 and now offers haunted tours at night.

Branstad was asked about the old prison in Fort Madison at his weekly news conference. Find the full audio here.