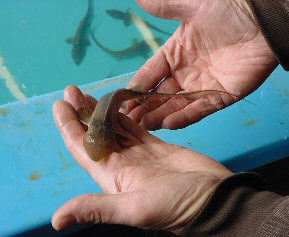 The immature larva of a pallid sturgeon being raised in a fish hatchery.

Information retrieved from small fish caught in the Missouri River between Iowa and Nebraska indicates the recovering habitat along that stretch of the waterway may be helping an endangered species to return.

Three fish larvae that were caught by U.S. Geological Survey scientists in May of 2014 are now confirmed as pallid sturgeon.

Aaron DeLornay is an ecologist with the USGS in Columbia, Missouri. “It’s the first time that we’ve ever caught this life stage,” DeLornay says. “This is a fairly early developmental period in the life cycle of the pallid sturgeon. It’s only a couple of days after hatch. After they hatch, they enter the drift and start drifting downstream.”

DeLornay says detailed testing of the tiny fish provided more encouraging news. “Genetics data suggests that these three fish are not related, which means their parents were different,” DeLornay says, “so there was some spawning aggregation at some location upstream of Omaha but below Gavins Point Dam where conditions were good for spawning.” DeLornay says finding these fish can help them better understand what types of habitat the fish need.

“It provides an opportunity for us to really capitalize on information that we’ve learned from the sturgeon,” DeLornay says, “to put that information into the context of the river itself and to inform potential management actions.” For years, scientists have been searching for signs of natural populations in the river. DeLornay says while finding the young fish is a positive step, it is too soon to say the species is out of danger.

By Jerry Oster, WNAX, Yankton/Photo courtesy of the U.S. Fish and Wildlife Service