You are here: Home / Education / Board of Regents discusses tuition increase, gives raises to ISU,UNI president 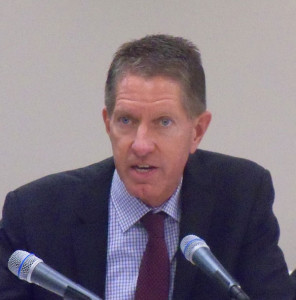 Board of Regents President Bruce Rastetter.

The Board of Regents talked about the proposed three percent tuition increase for students at the three state-supported schools today during their meeting in Ames.

Board president Bruce Rastetter says the small tuition increase should cover the shortfall. “We believe that’ll be sufficient as the numbers that were show today to maintain the quality of education — which is ultimately the most important aspect of this. We are concerned about student debt, but we believe that nominal increase will do both,” Rastetter says.

The board had talked about using some of the savings from the efficiency measures the schools have been working on to hold the line on tuition. Rastetter says that’s still in the mix, but the money isn’t available yet.

“You heard president (Steven) Leath say that one of the reasons he’s able to hire new faculty is because of some of the retirement of older faculty and the hiring of larger proportion of new…so some of those savings are being recognized. But most of those savings — like in sourcing and procurement — will come a year later because they are just being implemented now,” according to Rastetter. The board will vote on the proposed increase at their meeting in September.

Rastetter says he can’t predict if they will go back to a tuition freeze after the 2016 spring semester. He says they always look at it with one goal in mind. “Maintain as low a tuition increase that we can have and still maintain the quality and improvement of programs at the three universities,” Rastetter says. He says they have asked the presidents of the three schools to prepare a proposal for the next board meeting on their next budget and the money they will need from the state and any possible tuition increase. “And rather than speculate, we will wait and see what the number looks like.”

The regents also approved pay raises for the presidents of Iowa State and UNI. Iowa State University President Steven Leath is getting a 5 percent increase of his base salary to make it $525,000. The board also approved a five-year deferred compensation plan for Leath that will pay him $125,000 annually through 2020. University of Northern Iowa President William Ruud was given a 2.5 percent increase in pay, moving his base salary to $357,000. Ruud will also receive a two-year deferred compensation plan worth $150,000.