You are here: Home / News / A few Iowans are in the audience for tonight’s two GOP debates 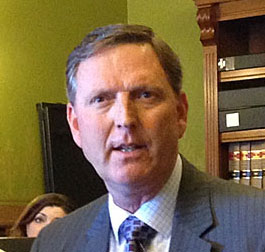 A Republican from Iowa whose endorsement is being sought after by the GOP presidential candidates is in Ohio today for the two televised candidate debates.

Bob Vander Plaats is president and CEO of The Family Leader, which hosted an event that attracted 10 candidates to Ames last month and he’s in the audience in Cleveland, Ohio now.

“It’s a time to network with other leaders around the country and to get a sense of what others are thinking, what they’re hearing, who’s resonating,” Vander Plaats said.

Vander Plaats told Radio Iowa he is just as interested in the first debate among the “second tier” candidates that starts at four o’clock as he is in the primetime event with the top 10 candidates.

“I think somebody has an opportunity to break out and move themselves into that first tier,” Vander Plaats said.

Vander Plaats said he’s also looking forward to seeing how the candidates conduct themselves when the camera isn’t focused on them. There are other Iowans in the arena to see tonight’s debates in person. The head of the Iowa Faith and Freedom Coalition, who is also a member of the Republican National Committee, is there, along with a handful of other Iowa GOP officials.